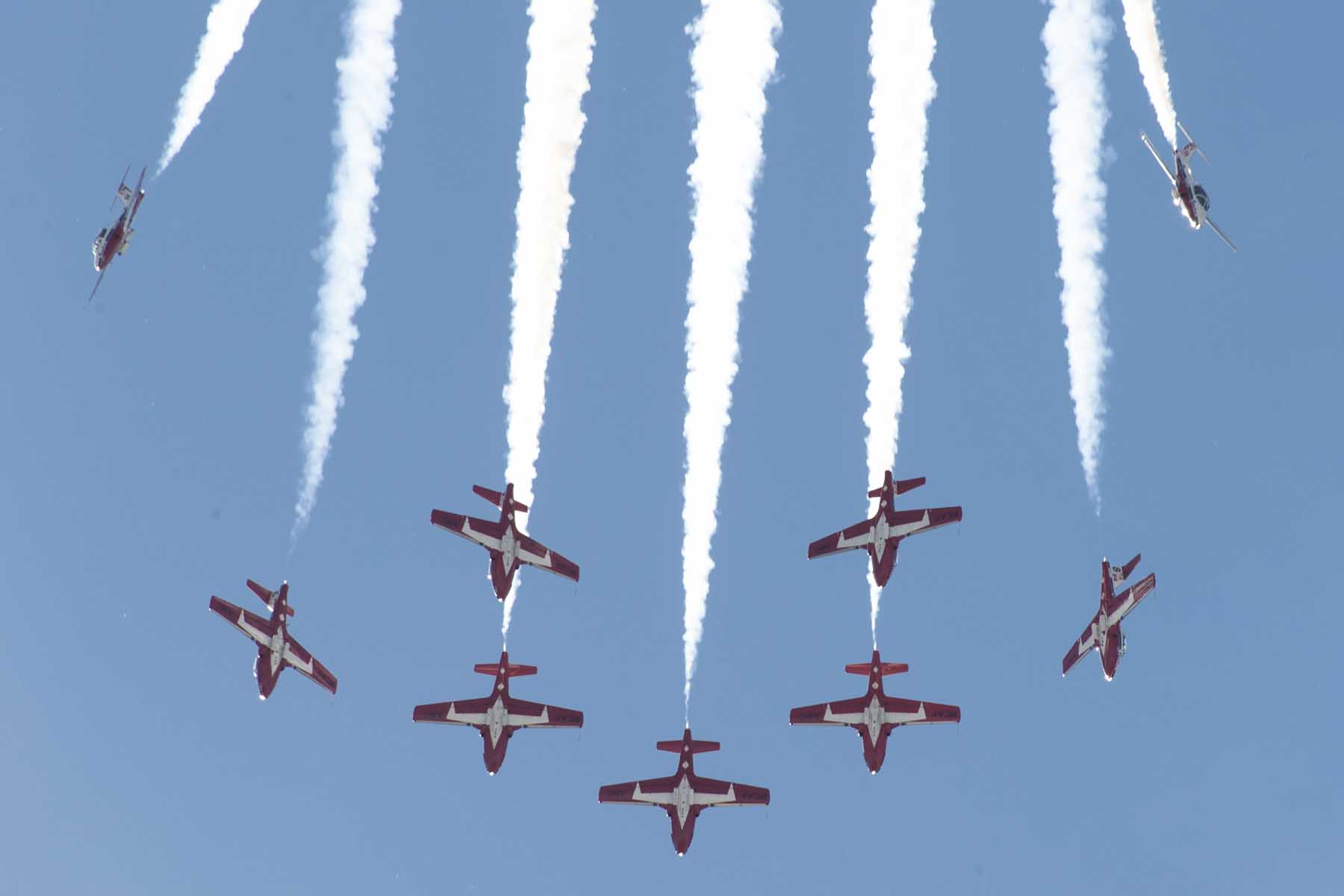 For the first time ever the Canadian Forces Snowbirds jet demonstration team will be appearing at Wings Over Wine Country. The Snowbirds bring a blend of high energy aerobatics and aerial ballet to dozens of performances throughout North America each year. Their flying routines demonstrate the skill and grace of the pilots as they fly their Canadair CT-114 Tutor jets through an amazing nine-plane routine.

The Air Show also welcomes back the USAF F-16 Fighting Falcon single-ship fighter demonstration. This intense flying demonstration shows the high-speed capabilities and amazing maneuverability of the F-16 fighter. The USAF F-16 will also fly in formation with a WWII vintage warbird for a Heritage Flight.

For the first time ever the USAF Wings of Blue parachute team will perform at the Santa Rosa air show. The Wings of Blue is the parachuting unit at the United States Air Force Academy, near Colorado Springs, Colorado. Since 1967, USAF cadets have dominated national intercollegiate parachuting, winning 21 national championships. Only 20 civilian air show appearances are approved each year, so Wings Over Wine Country is very fortunate to host this special team.

Vicky Benzing is a veteran air show performer and Reno air racer. In September 2014 she placed 1st in the Bronze Heat of the Jet Class and 1st in the Silver Heat of the Sport Class at the National Championship Air Races at Reno, NV. Vicky will grace the skies with a nostalgic aerobatic flight in her beautiful red Stearman biplane. Frank Donnelly is the doctor of the air as he guides his clipped wing Taylorcraft through an amazing aerobatic routine. His incredible talent becomes evident as he performs loops and rolls, as well as a breathtaking engine-off (deadstick) landing.

Gates open both days at 9:00 a.m. for pre-show activities, including radio controlled model aircraft demonstrations. The main Air Show events kick off just after 11:00 a.m. Tickets may be purchased at www.WingsOverWineCountry.org. Convenience charges may apply.

Pacific Coast Air Museum (PCAM) is a non-profit organization dedicated to promoting the acquisition, restoration, safe operation and display of historic aircraft, and to providing an educational venue for students and the community. We also honor those heroic aviators who have contributed so much to the growth and defense of our way of life.

Located in Santa Rosa, California, PCAM operates both an indoor museum with exhibits featuring famous military and civilian pilots and aviation innovators, as well as historical photos and artifacts; and an outside museum featuring more than two dozen excellent examples of both contemporary and antique aircraft.