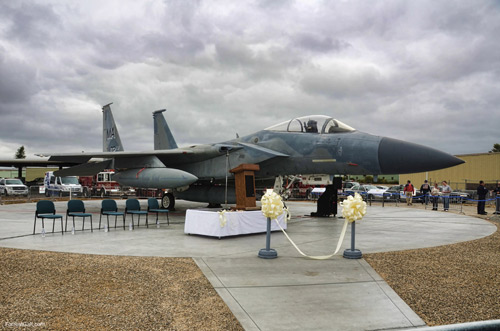 The PACIFIC COAST AIR MUSEUM (PCAM) is proud to host a ceremony on 9/11/2011 to commemorate the 10th anniversary of 9/11 to honor the brave men and women who responded on that terrible day, to honor the memory those who perished and to display the untold story of heroism in the air by U.S. Air Force pilots and on the ground by Air Force and FAA controllers on that day. This free event is open to the public and will be held at 2:00pm on Sunday September 11, 2011 at the Pacific Coast Air Museum at the Charles M. Schulz – Sonoma County Airport in Santa Rosa, California.

Back on the morning of September 11, 2001, Lt. Col. Tim “Duff” Duffy of the 101st fighter squadron, 102nd Fighter Wing based at the Otis Air National Guard Base (ANGB) Massachusetts near Cape Cod, MA and his wingman, Major Daniel “Nasty” Nash, were on active alert. That morning “Duff” received orders from NORAD to respond to a report of a commercial airliner hijacking. As the leader of the flight of two F-15A Eagle fighter jets “Duff” and his aircraft were the first American airborne fighter response on that day.

The historic “First Responder” aircraft “102” was retired to the Aerospace Maintenance and Regeneration Center (AMARC) at Davis-Monthan AFB, Tucson, AZ on July 31, 2006 after nearly thirty years of service. “102” was the wing commander’s aircraft and was the lead aircraft that responded from the alert shelters at Otis ANGB that day.

In the spring of 2009 the National Museum of the United States Air Force awarded the Pacific Coast Air Museum the honor to take possession of “102” and put it on display. The aircraft was partially disassembled and transported from AMARC in Tucson the museum December 2010. Since then the aircraft has been reassembled, an exhibit has been designed and the first phase of the F-15 “First Responder” Exhibit will be unveiled on 9/11/2001.

Our goal was to build a world class exhibit to honor those involved in 9/11 and to provide a venue for the public to see it and learn more about the events of that day. To that end the museum began an intensive fundraising campaign to raise $250,000 for the exhibit. We evaluated several design concepts for the exhibit and selected a winning design firm, which now stands as the centerpiece exhibit at the museum. The concrete foundation for the exhibit was poured in early August 2011 and the aircraft was hoisted into place soon thereafter. Finishing touches on phase one of the exhibit were in place for the ceremony and dedication of the “First Responder”. It was a moving ceremony attended by hundreds of people. CHP Captain Greg Tracy and former Secretary of the Air Force Tom Reed led the commemoration and dedication segments and the event included presentations by museum leadership and local dignitaries.

Pacific Coast Air Museum (PCAM) is a non-profit organization dedicated to promoting the acquisition, restoration, safe operation and display of historic aircraft, and to providing an educational venue for students and the community. We also honor those heroic aviators who have contributed so much to the growth and defense of our way of life.

Located in Santa Rosa, Calif., PCAM operates both an indoor museum with exhibits featuring famous military and civilian pilots and aviation innovators, as well as historical photos and artifacts; and an outside museum featuring more than two dozen excellent examples of both contemporary and antique aircraft.

For more information about PCAM and the 9/11 First Responder F-15 Fighter please call (707) 575-7900 or visit www.pacificcoastairmuseum.org. The museum needs your support to raise funds for the exhibit – click to donate and be part of this important piece of our history!

Attention: Photo opportunities, interviews with VIPs and tours of the facility will be available for members of the media.