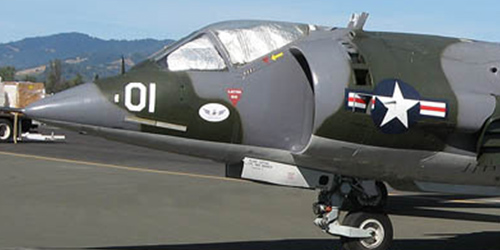 The June 15 and 16 Open Cockpit weekend features the AV-8C Harrier! The Harrier is a British plane, famous for its rotating exhaust nozzles that allow thrust to be directed straight down for vertical takeoff and landing. It can take off with a short forward takeoff run while carrying a full load.

Take a look in the cockpit and let our crew point out the unique controls that allow Harrier pilots to hover, rise straight up, move sideways, and scoot backward.

This aircraft is on loan from the National Naval Aviation Museum at Pensacola, Florida.