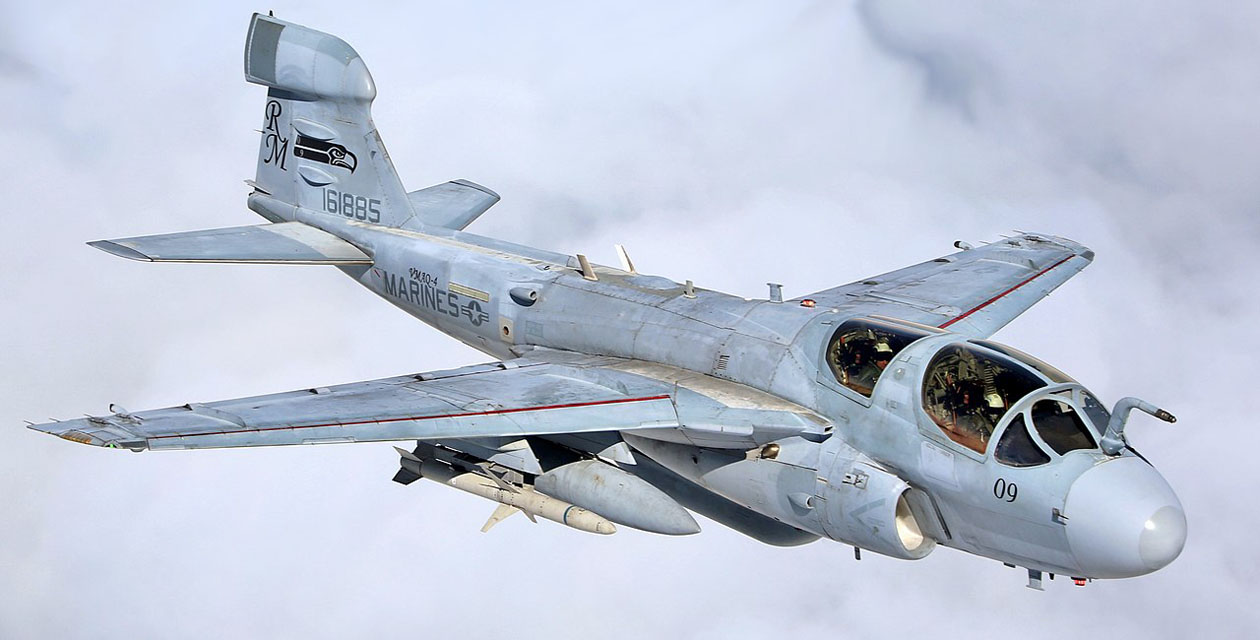 Our monthly Member Meetings typically include updates on important Museum news, a raffle, video presentations, a chance to visit with other Museum members, and a presentation by a featured speaker. Speakers may include military Veterans, historians, civic leaders, and other people with interesting stories to tell of their historical research or their aviation or military experiences.

From Our Own Fleet: EA-6B Prowler Electronic Warfare Aircraft

The Northrop Grumman (formerly Grumman) EA-6B Prowler is a twin-engine, four-seat, mid-wing electronic-warfare aircraft derived from the A-6 Intruder airframe. The EA-6A was the initial electronic warfare version of the A-6 used by the United States Marine Corps and United States Navy. Development on the more advanced EA-6B began in 1966. An EA-6B aircrew consists of one pilot and three Electronic Countermeasures Officers, though it is not uncommon for only two ECMOs to be used on missions. It is capable of carrying and firing anti-radiation missiles (ARMs), such as the AGM-88 HARM missile.

We will also show a short film produced by our sister museum, Wings Over the Rockies, and have comments by our own expert, Mark Fajardin.

Mark was born in San Francisco and has been married to his high school sweetheart Maria for 38 years. They live in Santa Rosa and have three grown Sons, Mark Jr., Steven, and Michael along with , two daughters in law and four grandchildren. Mark Sr. grew up in the airline industry with both his parents working for Western Airlines. Mark started flying at the age of 13, and joined the Navy in 1982 as an Aviation Structural Mechanic (AME). His specialty was ejection seats, AC and fire extinguishing systems. He trained on F-4 Phantoms and A-4 Skyhawks before settling in on P-3C Orions. Recently Mark assisted the Smithsonian Air and Space Museum with their documentary special on the Prowler / Growler aircraft and with the new book by Reid Air Publications, The Modern Prowler Guide: The Grumman EA-6B Exposed. Mark serves PCAM as its Vice President, Director of Aircraft and Exhibits, and as the Plane Captain of the A-6E Intruder and EA-6B Prowler. He is an active member of the A-6 Intruder Association, EA-6B Prowler Association, and US Navy Tailhook Association. He has his own company in the environmental / petrochemical industry and works as a volunteer Hazardous Materials Technician on the Sonoma County HazMat Team.