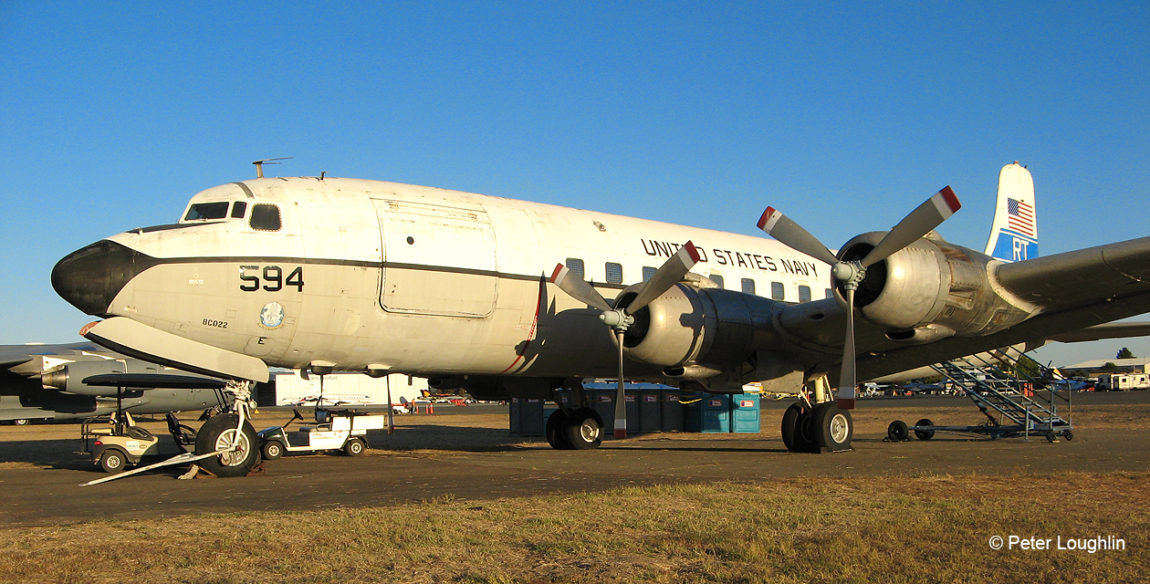 The C-118 Liftmaster on the field at the 2016 Wings Over Wine Country Air Show. The C-118 was a military adaptation of the highly successful Douglas DC-6 civilian airliner. 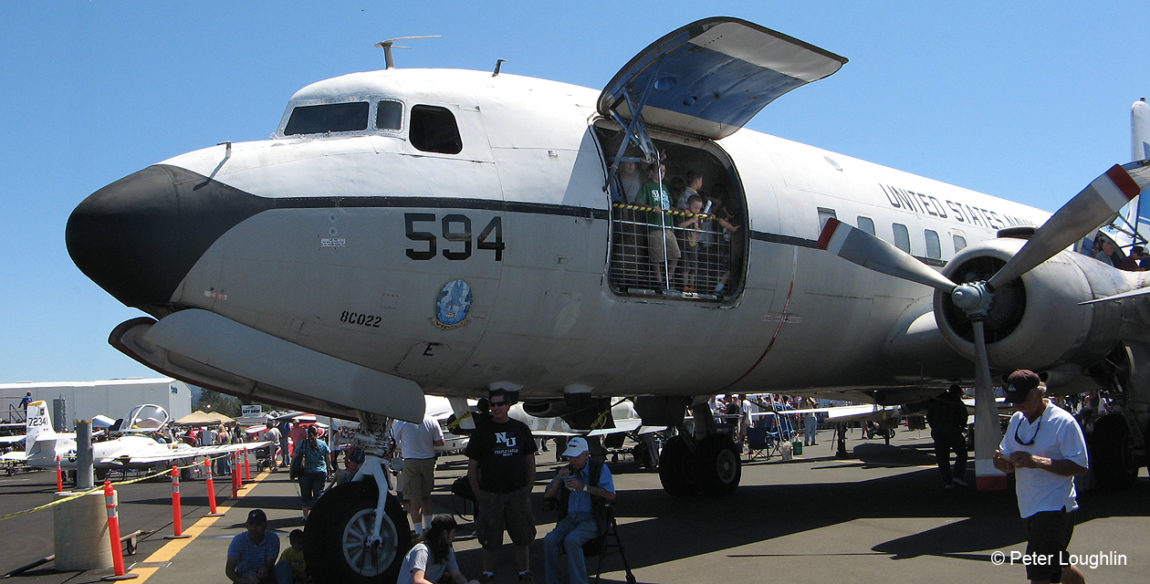 The C-118 is the biggest plane in the PCAM collection. It sat abandoned and derelict on the airport ramp for a couple years after the company that owned it went bankrupt. They were going to convert it into a fire fighting aerial tanker, but instead it got an easy retirement to our museum. Air Show guests love it, because they can stand in the shade of its fuselage and get a view above the crowd. 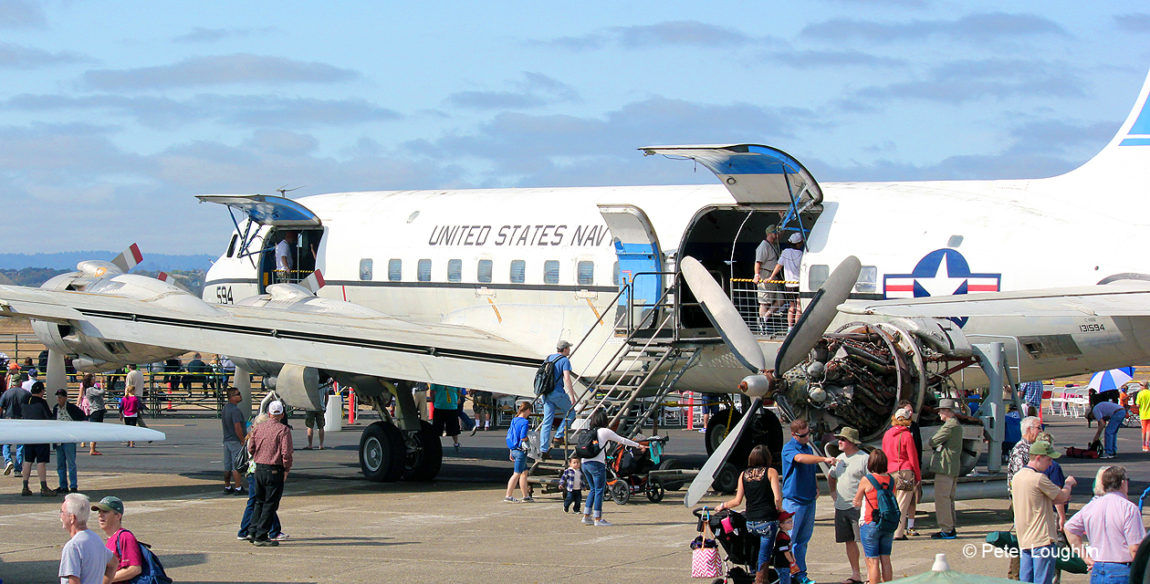 The C-118 at the Wings Over Wine Country Air Show. 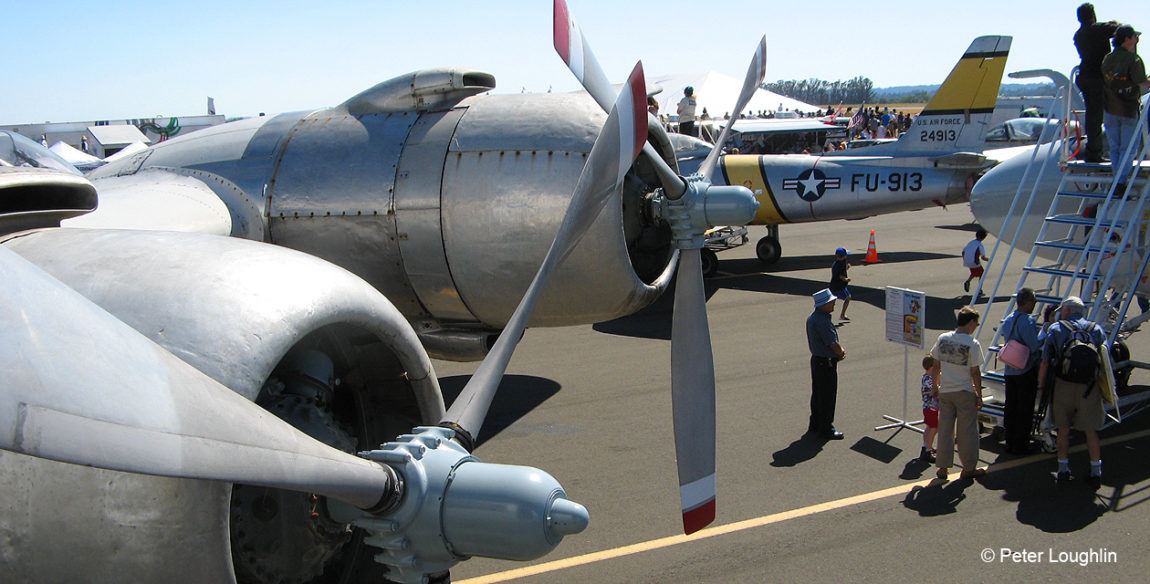 The C-118 was powered by four large 2,500 hp Pratt&Whitey R-2800-CB17 Double Wasp Radial Piston Engines. Though powerful when the plane was designed, the advent of jetprop engines and turbojets made them obsolete, and the C-118 and other piston-powered transports were phased out over the years. 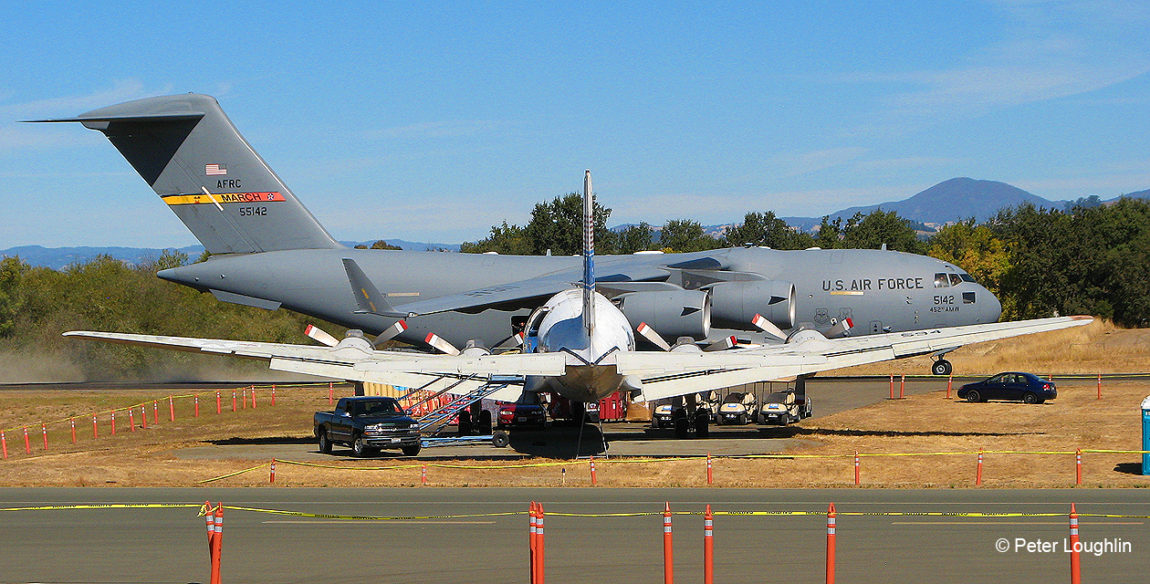 Our C-118 is big, but not nearly as big as the jet powered transports that replaced her and others like her. Here, a C-17 Globemaster III taxis to its parking spot the day before the 2016 Wings Over Wine Country Air Show. 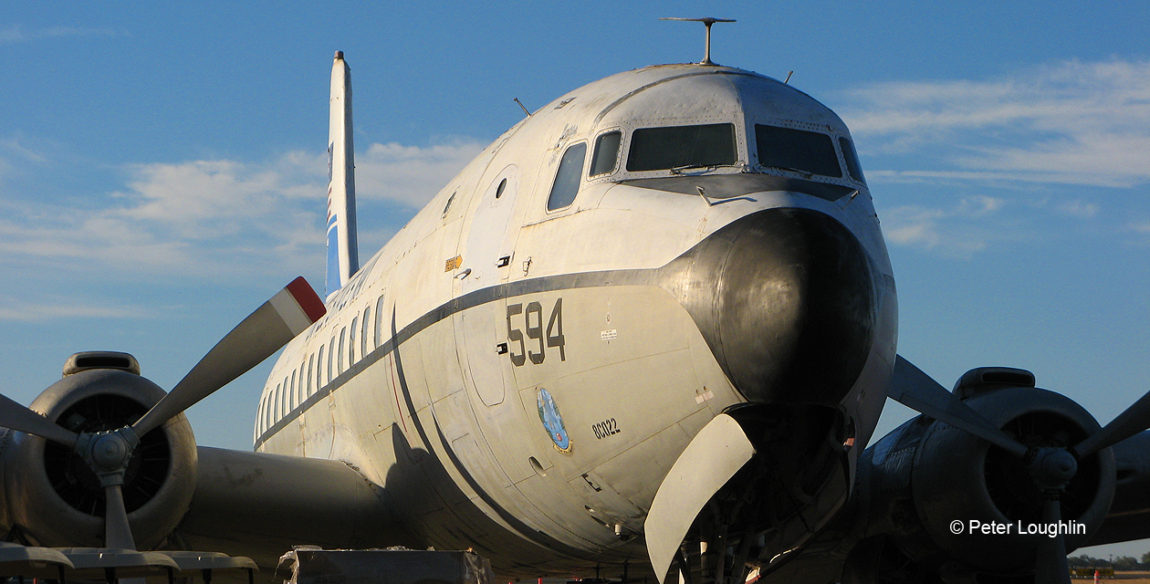 Though she no longer flies, the early morning light makes the C-118 look like she's ready to go. 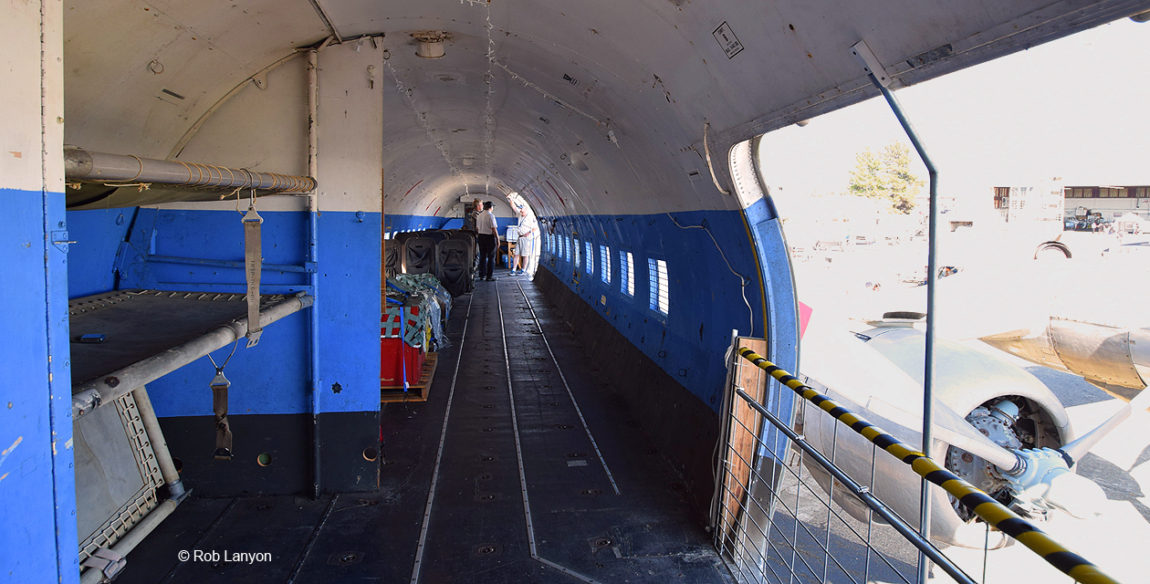 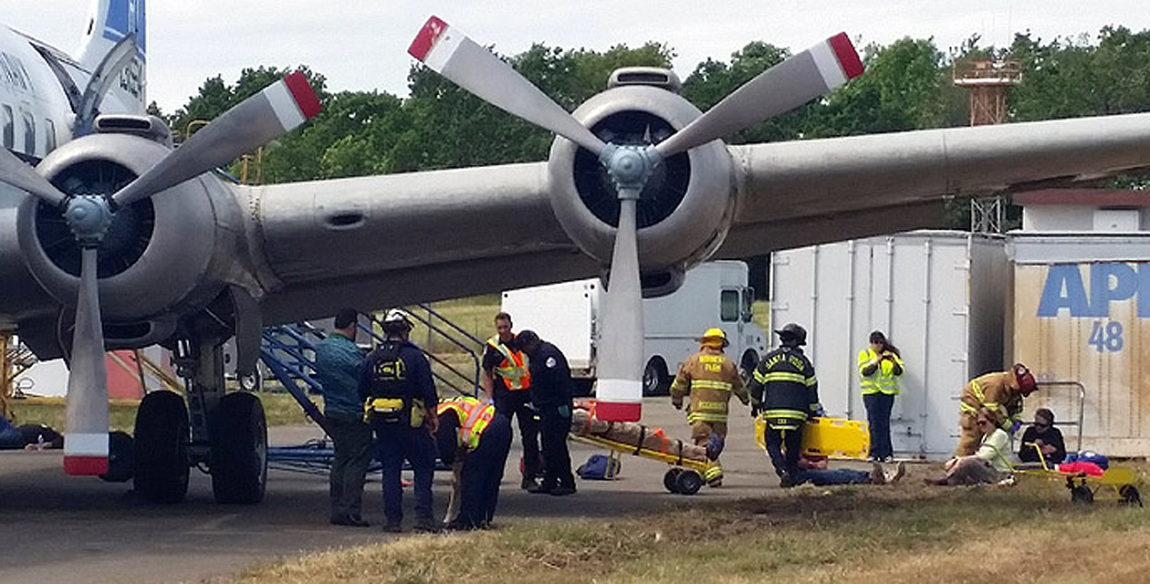 No, this is not a real accident. This is an emergency response exercise in which firefighters and other emergency responders practice responding to a serious accident. The Pacific Coast Air Museum is a proud part of our local community, and was only too happy to contribute our C-118 to this exercise. 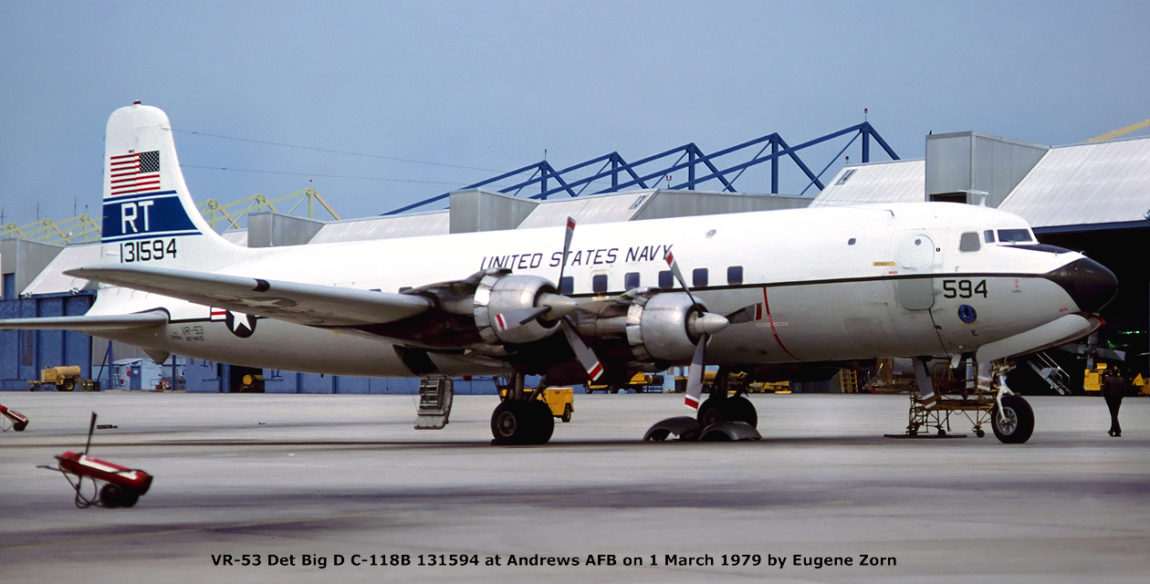 The PCAM C-118 during her military career, being tended to at Andrews Air Force Base on March 1, 1979. Her military service ended in July 1980.

This Liftmaster was built in 1953 and was purchased by the Navy from McDonnell Douglas in a buy lot of about 60 C-118s. It was transferred to USAF to increase airlift capacity between USA and Korea during the Korean conflict under command of MATS (Military Air Transport Service). After that it was transferred back to the Navy. At this time most of the C-118s came back into service with the Navy in the Naval Air Reserve Capacity in the early 60s.

Our C-118 served with just such a unit, VR-53 out of NAS Dallas, Texas from the 70s until July of 1980 when it was sent to MASDC (Military Aircraft Storage & Disposition Center) or more commonly known now as AMARC (Aerospace Maintenance And Regeneration Center, or the military Bone yard in Tucson, AZ).

The plane was purchased by Sis-Q flying service in either 83 or 84 and flown to STS. It served as a parts plane and a storage locker until it was abandoned after Sis-Q went out of business.  Pacific Coast Air Museumpicked it up in 1999.

Work to bring it back began in March of 2011 and 12 years of neglect had served to push it further into decline. We knew it had to look a lot better at the air show so most of the work concentrated on getting the exterior to shine up a bit. We worked on the tail paint and the markings on the sides as well as cleaning up the nose, and pressure washed most of the plane to get ready.

Inside we removed years of stored airplane parts both for this type plane and others. We re-installed the cockpit gauges (which had been carefully removed and stored by a member who had noticed the plane had been broken into), and we began scraping paint inside and cleaning out the stored parts in the baggage compartment.

We setup 8 rows of Navy issue passenger seats, and managed to have a cockpit set up by show time which allowed many, many people to get their picture taken in the pilot seat of a big airplane.

We had lines of people going all throughout the plane, from the rear bathrooms to the pilot’s seat, most of the day, both days of the show. It really surprised me to see so many people who were interested in this big plane!

Passengers: up to 60 combat troops, or up to 100 passengers depending upon configuration